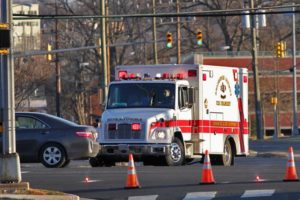 The county board is expected to award a contract on Saturday that would install an emergency vehicle preemption (EVP) system down the entire length of Lee Highway, from Rosslyn to Falls Church.

The system would improve the response times of emergency responders by preemptively turning traffic lights red for conflicting traffic in the path of an emergency vehicle.

The $563,902 contract, which includes an $87,384 cost overage contingency, would install the EVP system at 31 traffic signals on Lee Highway. The federal government is providing most of the funding for the project, with Arlington County chipping in about $130,000.

In addition to improving response times for the three fire stations on Lee Highway, the new EVP system would “also provide the infrastructure for a Transit Signal Priority system in the future,” according to the staff report.

EVP systems are currently in place on parts of Glebe Road and Columbia Pike, according to county spokesperson Mary Curtius.