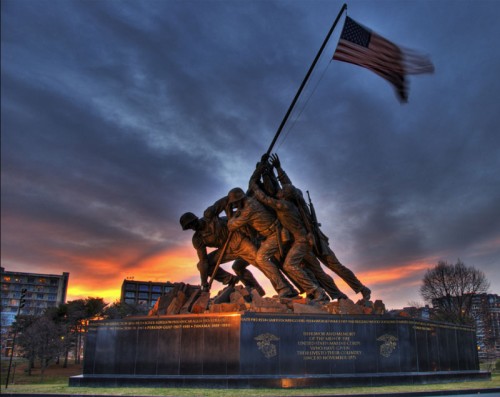 Iwo Jima Memorial Revamp Planned — One of the most memorable sights in Arlington may be getting a face lift. The 56-year-old Iwo Jima memorial is in need of a refurbishment and more frequent flag replacements, supporters say. A group, the Marine Corps War Memorial Foundation, also wants to add a volunteer-staffed reception center with permanent restrooms, replacing the plastic portable toilets currently on site. [USA Today]

George Allen Wants His Senate Seat Back — Former Sen. George Allen (R-Va.) says he will run for the U.S. Senate seat currently held by Sen. Jim Webb (D-Va.) and formerly held by himself. The 2012 race will also feature a challenge on Allen’s right during the primary. Some fellow Republicans wasted no time portraying Allen, once thought of as a possible presidential candidate, as “one of the biggest government guys out there” and “a part of the Washington establishment.” [Washington Post]

The Planetarium Booster — Meet Alice Monet, president of the Friends of Arlington’s Donald M. Brown Planetarium group. The retired Naval Observatory astronomer and Washington-Lee grad is helping to raise money to upgrade the planetarium and keep it open for future generations. [Washington Examiner]