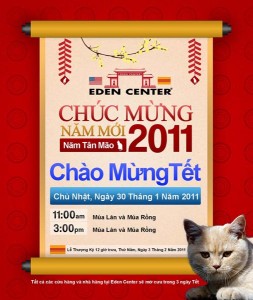 Update at 12:30 p.m. — The situation is apparently still not resolved. More firefighters and police officers are on their way to Eden Center.

The Arlington County Fire Marshal’s office is calling for backup at the Eden Center in Fall Church, which is apparently going in a bit overboard in celebrating the Chinese New Year.

“They’re shooting fireworks all around this area,” a fire official radioed to dispatchers a few minutes ago, while requesting that Fall Church Police respond to the shopping center.

Arlington firefighters initially responded to the center for an activated fire alarm. They quickly determined that the fire alarm was set off by fireworks and called in the fire marshal.

Eden Center, which is primarily a Vietnamese shopping center, is actually celebrating the Year of the Cat, as the above poster illustrates. The Chinese character for rabbit translates to cat in Vietnamese, according to Wikipedia.