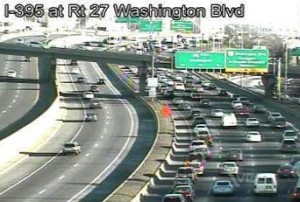 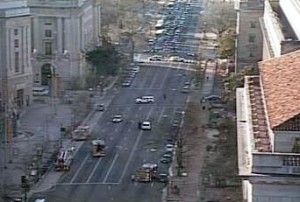 The main lanes of I-395 are backed up in Virginia from the 14th Street Bridge to the Springfield interchange due to fire activity in the District.

A fire at the Ronald Reagan Building and International Trade Center prompted a large emergency response that shut down 14th Street between Constitution Avenue and Pennsylvania Avenue. The fire, which originated in the building’s kitchen and spread through the ductwork, is now under control. Fire equipment has been clearing the scene and 14th Street will likely reopen soon — but that’s little solace to the thousands currently crawling along on I-395.

The good news, if any, is that the HOV lanes are clear until just past the Pentagon.