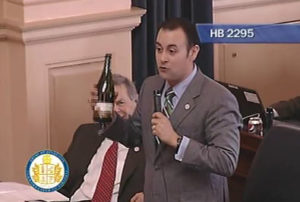 The state Senate yesterday unanimously gave final approval to a bill that will permit the production of hard cider at higher alcohol levels.

“If we let them produce real Virginia cider, the kind that Thomas Jefferson served at his dinner table, we’ll clear the way for Virginia to become the world’s leading producer of this popular libation,” said Englin, who represents parts of Arlington, Alexandria and Fairfax County.

“This is a jobs bill,” Englin added.

Englin issued the following press release about the bill this morning.

Richmond – With a final unanimous vote in the Virginia Senate, the General Assembly yesterday passed the Virginia Cider Act, which will allow Virginia cider producers to naturally ferment their cider without artificially capping the alcohol content. House Bill 2295, sponsored by Delegate David Englin (D-45), will launch a renaissance in Virginia’s burgeoning hard cider industry, opening the door for Virginia to become the world’s leading producer of traditional hard cider, according to industry experts.

“This legislation is a critical breakthrough for those dedicated to reintroducing Virginia and America to the libation our forebears made and enjoyed in the agrarian society from which we sprung. It will be a significant support to the development of a new industry, attractive to the tourists who visit our Commonwealth as well as our own people,” said Charlotte Shelton, founder and owner of Albemarle CiderWorks, who testified for the bill. “This legislation permits Virginia ciderists to produce a natural beverage without amendment reminiscent of what Jefferson served at Monticello and what Washington produced and served at Mount Vernon. Before this bill, Virginia ciders were required to be seven percent alcohol or less. Our apples do not know this. Apples grown in Virginia ferment naturally to something between four and 10 percent alcohol. This legislation frees Virginia ciderists to make the beverage apples were meant to produce, without amendment or adulteration.”

“I’m honored to have had the opportunity to help a burgeoning industry and to support the market for locally-grown Virginia apples,” said Englin, who carried the bill at the request of the Virginia Wine Council, whose members include cider producers. “My constituents are ecologically-conscious urbanites with a strong preference for locally-grown and locally-made agriculture products. This is an example of the mutually-beneficial relationship between urban and rural parts of our state.”

“One does not know how to predict how far it may develop or may grow,” said Shelton. “After all, 30 years ago, the very term Virginia wine was a virtual oxymoron, but today there are nearly 200 wineries in Virginia and Virginia wines have achieved an international reach. How much more logical to think that Virginia Cider may do as well or better? After all, grapes were a problematical crop for Mr. Jefferson, but he had two orchards, one devoted exclusively to cider apples.”

Delegate David Englin is Vice Chairman of the House Democratic Caucus and is serving his third term in the Virginia House of Delegates, where he represents the 45th District, which includes parts of the City of Alexandria, Fairfax County, and Arlington County. An Air Force veteran, Englin is a graduate of the U.S. Air Force Academy and Harvard’s John F. Kennedy School of Government. He serves on the Finance Committee, the Health, Welfare, and Institutions Committee, and the Agriculture, Chesapeake, and Natural Resources Committee. For more information, visit http://www.davidenglin.org.