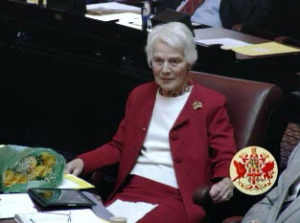 (Updated at 3:00 p.m.) Sen. Patsy Ticer, a Democrat who represents parts of Arlington, Alexandria and Fairfax, announced her retirement on the floor of the Virginia state Senate today. Her announcement will kick off a contested Democratic primary for the seat Ticer has held since 1995.

“I finally have come to the end of the line,” she told fellow Senators. “I do not intend to run again this year. I have been in public service for a long time… it’s hard to contemplate what life will be like without it.”

“I will always miss my home away from home in Richmond,” she said, fighting back tears. “It has been the privilege of a lifetime for me to know you and an honor to be of service with you in support of this beloved state. As a member of the Senate of Virginia, I will truly miss you. Thank you.”

The Senate chamber applauded Ticer as she received hugs and flowers from colleagues. Senators from both parties then took turns sharing their memories of working with Ticer, who turned 76 in January.

“I can think of no one else, in my lifetime, who epitomizes the term ‘Southern Lady,'” said Sen. R. Edward Houck (D-Spotsylvania).

“We will remember your grace and lady-like charms,” said Sen. Toddy Puller (D-Fairfax). “I know there are people lining up to run for the seat, but they won’t be Patsy… I’m going to miss you, friend.”

Three Democrats — Del. Adam Ebbin, Arlington School Board Chair Libby Garvey, and Alexandria City Council member Rob Krupicka — have all said they would seek Ticer’s seat if she declined to run for another term.

A Republican, Alexandria businessman Michael Maibach, told ARLnow.com that he’s thinking about pursuing the GOP nomination for the seat.

In a statement this afternoon, Ebbin said Ticer “will be greatly missed.”

“Senator Ticer is a valued colleague and someone who I consider a friend,” he said. “During her career as a public servant, she has distinguished herself as a leader for the progressive values of the citizens of Alexandria, Arlington, and Fairfax. She has been an advocate for the health, education, and welfare of children; the rights of women; and preserving Virginia’s natural beauty for future generations.”

“I wish her the best as she enjoys a well-deserved retirement,” Ebbin said.