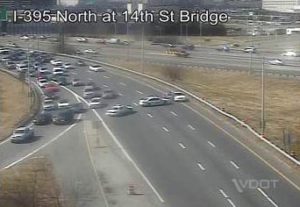 Update at 11:45 p.m. — News outlets are reporting that the officer’s injuries are not life-threatening.

Update at 12:00 p.m. — Police are blocking I-395 on the D.C. side of the 14th Street Bridge to allow for an extended investigation. Traffic is being diverted onto 14th Street in D.C.

Update at 11:45 a.m. — The bridge has been shut down again. Traffic is being diverted onto Boundary Channel Drive.

Update at 11:20 a.m. — All lanes of the 14th Street Bridge have reopened. Traffic issues remain in D.C., where eastbound I-395 is still blocked.

Earlier: Arlington police have shut down the northbound lanes of the 14th Street Bridge at the request of D.C. officials.

The closure is due to the landing of a Medevac helicopter in D.C. The helicopter will be landing in the area of I-395 and 7th Street SW, where a U.S. Park Police motorcycle officer (per WTOP’s Adam Tuss) was injured in a collision.

Northbound I-395 traffic is being diverted onto the George Washington Parkway.