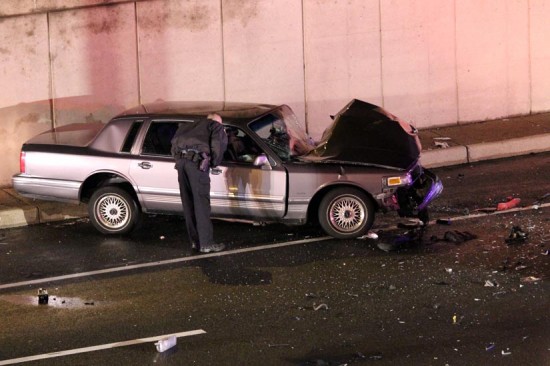 (Updated at 5:20 p.m.) Police were combing the area around I-395 early this morning after a hit-and-run crash involving a reported wrong-way driver.

Around 2:30 a.m., police got a call for a gray Lincoln Town Car heading southbound in the northbound HOV lanes of I-395. Just moments later, a call came in for a collision under the Arlington Ridge Road bridge.

According to Virginia State Police, the Town Car crashed head-on into a red Mitsubishi sedan, sending the Mitsubishi flying into a northbound tractor-trailer. The driver of the Town Car then fled on foot.

Arlington Police and Virginia State Police searched for the suspect — described as at the time as young, well-dressed man — but he remains at large.

Miraculously, the female driver of the Mitsubishi only suffered minor injuries. She was taken to a local hospital for treatment. The driver of the tractor-trailer was not injured.

HOV lane traffic backed up as police investigated the accident. Investigators are still trying to figure out how the Town Car entered the HOV lanes going the wrong way.

See the press release from Virginia State Police, after the jump. 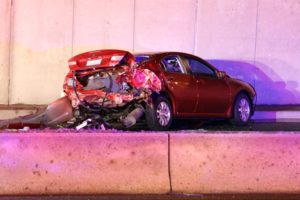 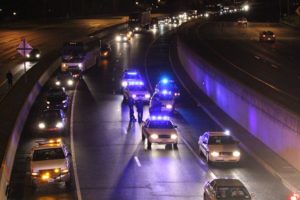 ARLINGTON – Virginia State Police are searching for the man who fled the scene after driving the wrong way in the HOV lanes and causing a three-vehicle crash early Monday, March 07, 2011.

At 2:40 a.m., Virginia State Police Trooper C.D. Rogers was notified of a light gray Lincoln Towne Car driving the wrong-way in the HOV lanes of Interstate 395 in Arlington. Moments later the southbound Lincoln struck a northbound Mitsubishi Gallant head on. The impact sent the rear of the Mitsubishi into the air and caused it to strike a northbound tractor-trailer that was traveling in the left HOV lane.

The driver of the Lincoln, meanwhile, fled the scene on foot running south in the HOV lanes. Witnesses described the driver as a Hispanic male.

Arlington County Police and Fairfax County Police responded to the scene to assist state police with searching the interstate for the missing driver.

It is unclear at this time as to where the wrong-way vehicle entered the HOV lanes. The incident remains under investigation.

Anyone with information on this incident or the driver is asked to call the Virginia State Police Fairfax Division at 703-803-0026.

The HOV lanes were closed for approximately 30 minutes, until the right shoulder was opened to through traffic. All lanes were open by 4:27 a.m.