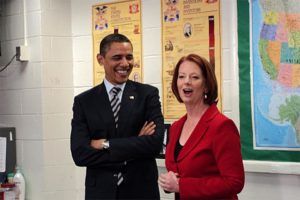 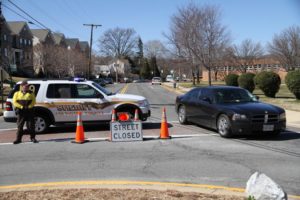 Obama and Gillard “discussed differences and similarities between their countries, [including] football and foods,” according to CBS White House Correspondent Mark Knoller.

Police shut down a number of streets in the area as a security measure during the visit, which wrapped up around 12:30 p.m.

Arlington, VA — Today, President Barack Obama made an unannounced visit to a class of students at Wakefield High School in Arlington, Va. Accompanying the President on the surprise stopover were the Honorable Julia Gillard, Prime Minister of Australia, and U.S. Secretary of Education Arne Duncan.

After being greeted upon arrival by Arlington Superintendent Dr. Pat Murphy, School Board Chair Libby Garvey and Wakefield principal Dr. Christian Willmore, the dignitaries surprised a class of 22 juniors in the midst of their Advanced Placement U.S./Virginia History class. After brief remarks by the visitors, the students had an opportunity to ask questions and discuss current issues with their guests. Before the dignitaries departed, Colette Fraley, the Arlington and state Region IV Teacher of the Year and teacher of the class, thanked them for the special honor and accepted gifts for the students from Prime Minister Gillard.

This week marks the Australian Prime Minister’s first official visit to the United States. Gillard has a strong interest in education and served as her country’s minister of education before being elected as Prime Minister in 2010.

Today was President Obama’s second outing to Wakefield High School. His first visit was in September 2009 when the school was selected as the location for the President’s back school message.

Dr. Christian Willmore, principal of Wakefield, said, “Today’s visit was a once-in-a-lifetime opportunity for Wakefield and our students. We are extremely honored that President Obama, Prime Minister Gillard and Secretary Duncan devoted time from their schedules today to engage our students in such a special way.” He continued, “The relevance of our students’ daily work in the classroom is heightened when they have an opportunity to spend time with role models from our community and beyond. I am confident that today’s visit by these leaders will serve to further inspire our students as they work to become the future leaders in our community and our nation.”

(An earlier version of this story reported that a VIP would be visiting the school, but did not say who the VIP was. The visit was not on the president’s public schedule this morning.)