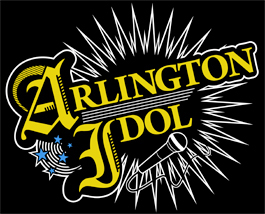 Four high school students will vie for the title of “Arlington Idol.” The finalists — as voted by their classmates — are Mary Shields of H-B Woodlawn, Danyele Greenfield of Wakefield HS, Abir Haronni of Washington-Lee HS and Kate Mountain of Yorktown HS. They will be joined on stage by the U.S. Army Band “Downrange,” the pop/rock contingent of the military’s music corps, who have assisted with the competition since its inception.

Four runners-up from each county high school will perform as the band’s back-up singers this year. The runners-up are: Kyra Klontz of H-B Woodlawn, Tigist Worku of Wakefield HS, Mallory McKenzie of Washington-Lee HS and Rachel Gromberg of Yorktown HS.

The show will start at 7:30 p.m. at Kenmore Middle School (200 S. Carlin Springs Road). Admission is free and open to the public, but Arlington residents can also watch a live broadcast on Comcast channel 72 and vote for their favorite vocalists via text message.

The 2009 Arlington Idol winner was Sophia Delmar of Washington-Lee. See a video of the 2009 winner’s performance after the jump.