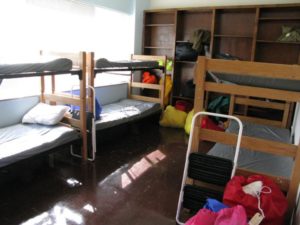 Arlington County’s emergency winter shelter is now closed, and the dozens of homeless individuals who stay there will be looking for a new place to sleep tonight.

About 50 percent of the shelter’s clients will stay in Arlington County over the summer, according to shelter director Olivia Payton. Most others will go to Fairfax, Bailey’s Crossroads, Alexandria and the District, where shelters remain open year-round.

Those who do stay in Arlington will sleep in parks, under bridges, and in wooded encampments. John Rotalsky, who slept at the shelter last night, said he will likely sleep in an encampment near Gateway Park and the Mt. Vernon Trail in Rosslyn tonight.

“We can go to the national parkland, stay there at night, and pack out in the daytime,” he said. “They let us do that.”

Rotalsky, whose religious convictions are documented in a recent online video, said the service provided to the homeless in Arlington “is a huge blessing.”

“Arlington County is just light years better than anything else in this area,” Rotalsky said. “I have not been threatened in the three and a half months that I have been living there. No one has tried to shake me down or rob me, and that’s normal stuff in D.C. shelters.”

The county mandates that the shelter only remain open from Nov. 1 to March 31. The Arlington Street People’s Assistance Network (A-SPAN), which runs the shelter, has been pushing for a year-round shelter in Arlington for some time now. Such a shelter is needed, especially during spring cold snaps and summer heatwaves, they say. The County Board formally set the goal of establishing a new, year-round shelter last month. First, however, a location for the new shelter must be found.

While A-SPAN does not operate a shelter in the warmer weather months, it still provides services via volunteers who travel the county bringing food and supplies to homeless individuals and through its Opportunity Place headquarters in Shirlington. A-SPAN also tries to place homeless individuals into permanent housing, but those resources are limited.

Rotalsky says he looks forward to the day when the county is able to open a year-round shelter.

“It’s a real treat staying here at the A-SPAN shelter,” he said. “I don’t want to leave.”