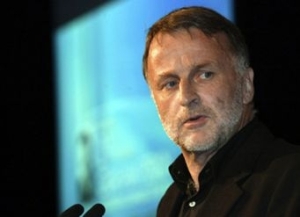 When noted Irish-Australian journalist and author Paul McGeough wanted to propose to his girlfriend, he decided to do so in the place where they first met — the Shirlington library.

McGeough met now-fiance Nadia Itraish at the library 18 months ago, during the author talk for his book Kill Khalid: Mossad’s Failed Hit and the Rise of Hamas. Following a “very animated discussion” about the book, Itraish — a Palestinian-American peace activist, George Washington University alum and Freddie Mac manager — came up to McGeough to continue the conversation. The pair “hit it off” and started dating, according to library employee Ann-Marie Dittmann.

On Saturday afternoon, with the discreet help of library staff, McGeough brought Itraish to a library conference room — like the one in which they met — and asked her to marry him. She said yes, and the couple went across the street to Busboys and Poets to celebrate.

McGeough’s marriage proposal was a first for the four-year-old Shirlington library, according to Dittmann.

The engagement came 10 months after McGeough, the chief foreign correspondent for the Sydney Morning Herald, survived a deadly Israeli commando raid on a Gaza-bound aid flotilla that he was reporting on. McGeough spent several days in Israeli custody before being released.

Itraish spent those days in fear that McGeough had been killed, according to an article in The Australian newspaper. The story ended happily when McGeough returned safely to the U.S. The couple now lives in McLean.

Photo via the University of Sydney