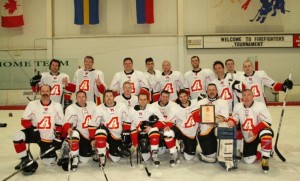 The team was formed less than two months ago, and they only got their jerseys the day before their first game, but Arlington cops and firefighters managed to take first place in a charity hockey tournament over the weekend,

Team organizer Sean Spencer says the 30-man roster contains people who have been playing ice hockey since they were kids and people who just took up the sport in the past couple of years. They had great chemistry on the ice, he said, despite only playing together as a team one time prior to the tournament.

“We’re pretty happy with the outcome,” Spencer said. “[The players] are ecstatic we got a team together and were successful at the level we were.”

Spencer says the D.C. and Baltimore fire teams have already asked for a rematch. To facilitate that, he’s planning on talking to Ballston’s Kettler Capitals Iceplex about setting up a charity tournament in a couple of months, to benefit the Muscular Dystrophy Association.