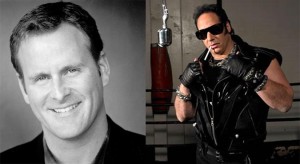 Dave Coulier, of Full House and America’s Funniest People fame, will be performing a “special family-friendly comedy show” at the Drafthouse on Mother’s Day weekend. Tickets to see “Uncle Joey” — on Friday, May 6 and Saturday, May 7 — are $23 apiece.

Just one week after Coulier’s squeaky-clean stand-up act, the only performer ever banned for life from MTV will take the stage.

Andrew Dice Clay, described in promotional materials as the “most controversial and outrageous comic of all time,” was the first comic to sell out Madison Square Garden two nights in a row. Now, having just landed a reoccurring role on HBO’s Entourage, he’s coming to Arlington for two nights of comedy.