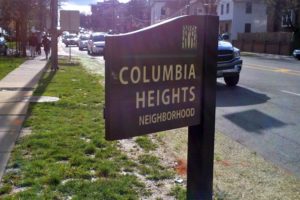 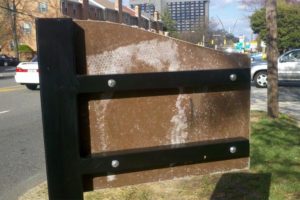 A granite sign that went missing from the side of Columbia Pike has been found.

The sign (shown above, before it went missing) was placed on the east end of Columbia Heights to announce to drivers that they were entering the neighborhood. On Tuesday we reported that it had disappered.

Christine Nixon, chief of the county’s Neighborhood Services Division, said someone may have tried to steal the sign and then simply gave up.

“Parties unknown at present unscrewed the sign and left it lying in the median,” Nixon said in an email last night. “It’s really, really heavy so I’m assuming that they tried to lift it and couldn’t. Our keen-eyed folks at [the Parks Department] noticed the sign lying there and picked it up and took it to their storage area. So we are going to reinstall it shortly with bolts that can’t easily be unscrewed (and maybe a more attractive rear view).”