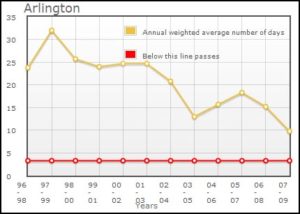 The American Lung Association has assigned Arlington and the District a failing grade for smog levels.

In a report released this morning, the association said the Washington region has the 14th highest ozone (smog) levels in the country. Arlington itself was slightly less polluted than the District, with an average of 9.8 ‘high ozone’ days compared to 10.7 days in the District.

The average number of high ozone days in Arlington has been been falling steadily since reaching a high of 32 from 1997 to 1999 (see chart, left).

“The progress we have made here in the District is due to the Clean Air Act; it has proven that cleaning up pollution results in healthier air to breathe,” said Dennis Alexander, Regional Executive Director for the local office of the American Lung Association. “Unfortunately, the D.C. metro area is still one of the most polluted areas in the nation and we still have a long way to go to achieve healthy air. This is exactly why we cannot stop now.”