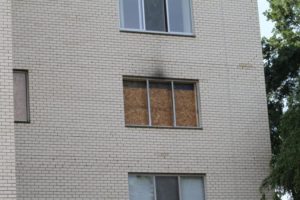 (Updated at 1:20 p.m.) A man was killed in a two-alarm fire at the Prospect House condominiums (1200 N. Nash Street) in Ft. Myer Heights last night, authorities have confirmed.

Fire broke out in a third floor condo around 11:20 p.m. Firefighters arriving at the scene reported heavy smoke and flames. One victim was found in the apartment and transported to George Washington University Hospital. He was later pronounced dead.

Firefighters were able to extinguish the blaze relatively quickly, said ACFD spokesman Lt. Gregg Karl. There was significant damage to one apartment and some smoke damage to nearby units.

The victim has been identified as 77-year-old Frederick Cole, the sole occupant of the apartment that caught fire.

“The fire investigation is ongoing, but it does not appear to be suspicious at this time,” authorities said in a statement.