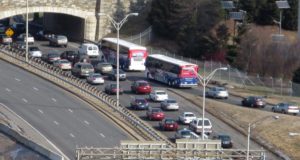 Route 110 will be closed near the Pentagon tomorrow morning due to an “Armed Forces Farewell Tribute” to retiring Defense Secretary Robert Gates.

President Obama will be among the dignitaries in attendance at the ceremony, which is expected to get underway at the Pentagon around 9:45 a.m. A military spokesman was unable to release any other details about the event.