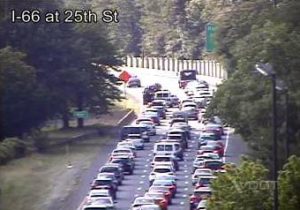 Update at 4:45 p.m. — Two lanes are now getting by the accident scene.

Traffic on the westbound lanes of I-66 is heavy from Spout Run to the eastern border of Fairfax County due to an accident.

Two cars were involved in an accident near Williamsburg Boulevard. At least one person was injured and transported to a hospital.

One lane is blocked while crews work to clean up the wreck. A Twitter user said the westbound lanes of I-66 are like “a parking lot” before the accident.