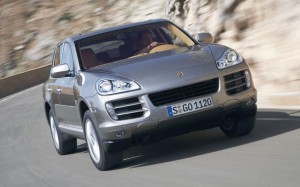 A Porsche Cayenne carjacked from the Aurora Highlands neighborhood last night was used in a brazen armored car robbery in D.C. this afternoon.

According to Arlington Police, the luxury SUV was stolen around 10:30 last night. Two men wearing masks and pointing guns approached the car after it pulled out of a driveway on the 1100 block of S. 18th Street. The men, described as in their late teens or early 20s, forced two women out of the car, stole their purses and drove off.

Just after noon today, the Porsche and two men — presumed to be the same suspects from last night — were involved in an armored car robbery at 16th and M Streets NW, just south of Scott Circle in the District. The men — one with a machine gun and the other with a 9 millimeter pistol — attempted to hold up a Brinks truck, according to initial reports. It’s unclear if they made off with any money.

Arlington Police were told to be on the lookout for the vehicle this afternoon, shortly after the robbery. Officers were told that the Porsche was last seen speeding north, away from the scene of today’s crime.