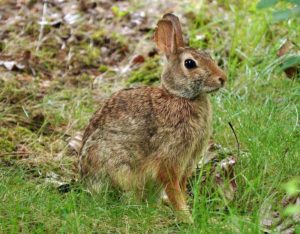 The rabbit population is on the rise in Arlington.

A resident of the High View Park neighborhood, just north of Virginia Hospital Center, tells us that neighbors have been buzzing with talk of a bunny boom.

“I’ve noticed something odd in Arlington this summer and the more I talk to other residents the more aware I become that this is happening all over the county (at least north Arlington, anyway). Namely, there has been an explosion in the rabbit population this year,” he writes. “I’m used to bunny sightings being a very rare thing, but this year I keep seeing them on a regular basis. I’m spotting rabbits more frequently than I have spotted squirrels.”

Those observations are backed up by Arlington County Parks spokesman Nathan Spillman, who confirms that naturalists have observed a rapidly increasing rabbit population.

“It is indeed a boom year for rabbits in the county,” Spillman said, “Rabbit populations here are cyclical and about every seven or eight years you see a large spike in the population followed by a relatively steep (and quick) decrease as the boom attracts predators like foxes and hawks which bring the population down… It’s likely the decline will start to become noticeable as early as this November,”

According to a just-released inventory of wildlife in Arlington, the rabbit population in Arlington (made up mostly of Eastern Cottontails, pictured) typically moves in cycles with the population of its primary predator, the fox. That’s consistent with anecdotal evidence cited by Sean, our tipstser.

“[A relative] who lives near Marymount University mentioned that she has seen dead foxes on the road numerous times and speculated that the loss of these predators might have resulted in the rabbit increase,” Sean wrote. “That seems to tie in with this article about the loss of predators in general.”

The population boom may not be limited to Arlington. Earlier this month, a Washington City Paper article declared that “bunnies are everywhere” in parts of Montgomery County and Northwest D.C.

“The manicured lawns of Chevy Chase are covered with rabbit families munching away on annuals and woody plants in the early morning,” a member of a neighborhood listserv is quoted as writing. “Early runs in various neighborhoods sometime remind me of Watership Down or the ‘tribbles’ in one of those Star Trek episodes.”

Read more →
More Stories
Deal of the Day: Burger for a BuckCar on Fire Blocks I-66