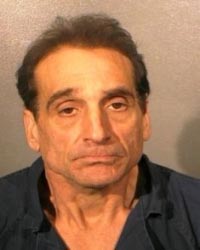 (Updated at 10:20 a.m.) Arlington County Police have arrested a man suspected of robbing up to six banks in Arlington this summer.

D.C. resident Peter Cifala, 57, was arrested on Friday and charged with one count of bank robbery.

“Though the suspect is charged with one robbery at this time, the robbery is believed to be related to a series of five other bank robberies that occurred over the past three months in Arlington County,” police said in a statement.

Authorities say Cifala was nabbed thanks to tips and increasingly detailed surveillance images.

“The pictures got progressively better,” police spokeswoman Det. Crystal Nosal said. “The investigation was greatly assisted by citizens who called the police department with tips, and a tip from the Arlington County Sheriff’s Department”

“We’re happy,” Nosal added. “[The arrest] is going to be reassuring for bank employees and people who go into banks.”

Cifala was apprehended with the help of the Northern Virginia Violent Crimes Task Force, police said. He’s currently being held in the Arlington County Detention Center.

Cifala has a long rap sheet that includes more than 20 criminal convictions in Virginia, including nine separate grand larceny, attempted larceny and petit larceny charges in Arlington between 1991 and 2002.

Update at 1:45 p.m. — We’re told that a sheriff’s deputy in the Arlington County Detention Center’s booking room recognized the most recent surveillance photo of Cifala.