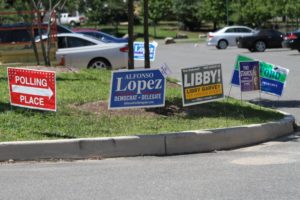 Voting in Arlington is proceeding as normal, despite today’s earthquake.

All voting centers are open, according to county elections officials, but voting has been moved outside at the George Mason University voting center due to the university’s decision to close all of its buildings. Some voting centers were briefly evacuated after the quake, but polls will close at 7:00 p.m. as scheduled.

“We should be fine… there have been no reports of any issues at all,” said Arlington County Registrar Linda Lindberg. She noted that the only people calling to ask about keeping the polls open later have been the candidates themselves.

Lindberg said overall turnout is still estimated to be about 7 to 10 percent of active registered voters.

“Turnout is about what we’ve expected so far,” she said.

According to Lindberg, turnout is expected to be higher in the 31st state Senate District, the battleground of a contentious Democratic primary.