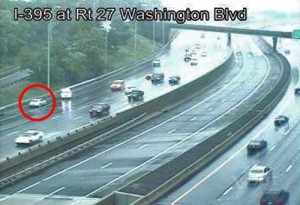 How exactly does this happen?

Arlington police pulled over a driver that was heading the wrong way this morning on southbound I-395, near Washington Boulevard.

After checking to make sure the car wasn’t stolen, and after making sure its owner wasn’t wanted for a crime, the officer blocked the right-hand traffic lane to allow the driver to safely turn around and head the right way.