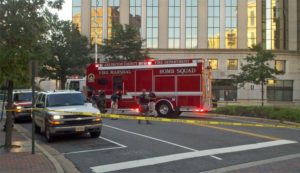 Updated at 8:55 a.m. — ART reports that the scene in front of the county building is now clear and buses are running normally.

Roads are closed in front of the county office building at 2100 Clarendon Boulevard, in Courthouse, while authorities investigate a suspicious envelope.

Police were unable to provide any additional information about the investigation, but a photo of the scene shows the county’s Bomb Squad truck and a Bomb Squad member in full blast gear.