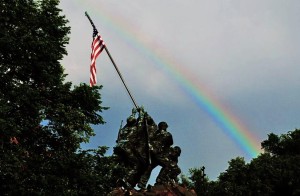 As of midnight last night, the law known as Don’t Ask, Don’t Tell was officially repealed.

Gay and lesbian service members may now publicly reveal their sexual orientation without fear of being kicked out of the military. The repeal comes nine months after President Obama signed the initial DADT repeal law and two months after the president certified that conditions for the appeal — including extra training for military personnel — had been met.

To celebrate the end of Don’t Ask, Don’t Tell, the Arlington Gay and Lesbian Alliance will be holding two separate events. Tonight from 8:00 to 11:00 AGLA will host “Yes We Did DADT Karaoke” at Freddie’s Beach Bar & Restaurant (555 23rd Street S.) in Crystal City. The free event is also sponsored by the Arlington Democrats and the Arlington Greens.

“Join AGLA for an evening of celebration, socializing, great food and drinks,” organizers said. The Wednesday event will be held from 6:00 to 8:00 p.m. on the restaurant’s second floor.