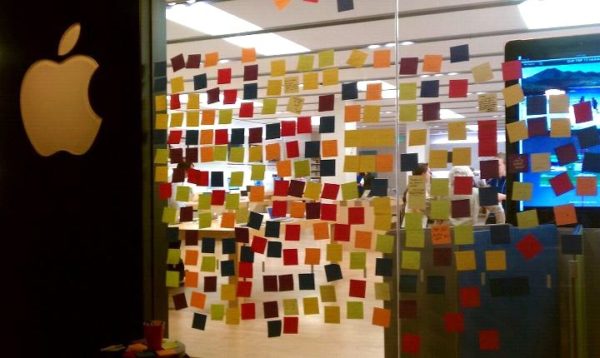 Steve Jobs Memorial Grows — The Post-it-Note memorial to Steve Jobs at the Clarendon Apple Store is getting bigger. Since we arrived at the Apple Store yesterday morning, the memorial has grown from zero to dozens of hand-written notes for the late Apple founder.

Favola Takes Aim at Merrick on NRA Rating — Republican State Senate candidate Caren Merrick was given an “A-” rating in a new candidate “scorecard” issued by the National Rifle Association. Democrat Babara Favola, meanwhile, received an “F” rating. But it was Favola who took the offensive. It’s “not a grade my opponent should be proud of,” Favola Tweeted. Said Favola campaign manager Adam Scott: “Caren Merrick is supported by the Tea Party, the NRA, and anti-choice extremists who want to chip away at a woman’s right to choose in Virginia. That’s just not what we need in the state Senate.”

Relocated ‘Nine’ Starts Tonight — The Arlington Players production of ‘Nine’ starts tonight at the Kenmore Middle School Theater. The musical — which was made into a Hollywood movie two years ago — was originally scheduled to be held at the Thomas Jefferson Middle School Theater. It had to be relocated, however, due to earthquake damage at the theater. [The Arlington Players]

Lots of Events This Weekend — There’s plenty of stuff going on in Arlington on what promises to be an absolutely beautiful fall weekend. If you want to support a high school car wash, or attend an Oktoberfest, or party with artists, check out our Events Calendar.