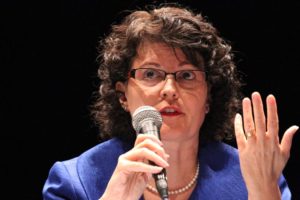 The Washington Post and the Arlington Sun Gazette both endorsed Favola yesterday, passing over her opponent, Republican Caren Merrick.

“Our inclination at the beginning of the race was to favor Merrick,” wrote the Sun Gazette. “But as the campaign progressed, we’ve been left wondering exactly what her core political philosophy is, and how she will put it into action, if elected, in Richmond.”

“Democrat Barbara Favola, a knowledgeable veteran of the Arlington County Board, would be effective in the Senate from Day 1 representing this district,” wrote the Washington Post. “Ms. Merrick, despite her valuable business experience, has offered no plausible alternative for tackling [traffic] gridlock.”

Favola and Merrick are scheduled to debate tonight at the Cherrydale Volunteer Fire Department (3900 Lee Highway). The debate is expected to begin around 7:30 p.m.