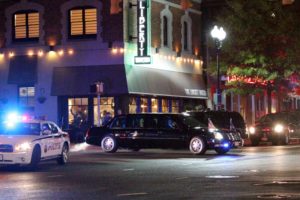 (Updated at 10:20 p.m.) Clarendon buzzed even more than usual this evening, thanks to a presidential visit.

People passing through the Clarendon area started hanging around and watching once they saw the blocked-off perimeter, dozens of police and security personnel for blocks and a telltale special event tent on N. Irving Street, next to Liberty Tavern. The president finally arrived in his black limousine around 6:50 p.m., as Arlington County police helped set up rolling roadblocks.

Liberty Tavern co-owner Stephen Fedorchak said he had an inkling on Tuesday that President Obama might be stopping by, and the confirmation came on Wednesday. As with all such presidential visits, Fedorchak had to keep quiet until tonight. 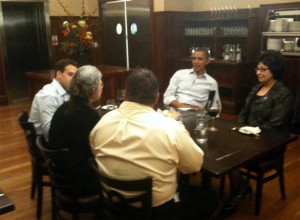 “As an Arlington restaurant and independent business people, we’re just extremely flattered,” Fedorchak said. “It’s an honor. We understand the magnitude of it but we wanted to have fun with it as well. We offered the same hospitality we strive for with every guest that comes in our restaurant.”

Server Randi Milton said although the dinner group discussed serious topics, such as the economy, there was much laughter. She said the president asked about each of his guests’ lives and families. Milton said she didn’t get to talk to President Obama very much because he was so focused on his guests.

“Obviously, he was not there to interact with us,” she said. “I shook his hand, took his order, and he chatted with us a little after dinner. But the point was not to talk to us, it was to talk to them.”

The president’s team had researched the menu at Liberty Tavern and didn’t want to limit themselves by just requesting one special item. The guests all ordered off of the regular menu, and the President dined on swordfish with white beans and lamb sausage. 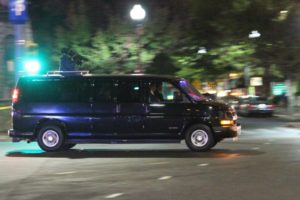 When asked about the possibility of increased business from this event, Fedorchak said, “We want to be respectful of the fact that the President dined in our restaurant in terms of how we market it. But we’ll gladly accept any additional business as a result.”

Media and passersby gathered on nearby street corners to attempt catching a glimpse of President Obama as he left Liberty Tavern. Many tried in vain to snap pictures, but the security perimeter kept most people too far away to land a good shot. Traffic crawled through Clarendon and the already tough intersection of Washington Boulevard and Wilson Boulevard, at a couple times completely stopping as the presidential motorcade passed through.

The president left the restaurant just before 8:00 p.m. and was met outside with dozens of cheering onlookers.

“This is really cool,” one woman said. “I’ve lived here 17 years and I’ve never seen anything like this.”

The last time President Obama came to Arlington for a meal was June 24, 2010, when he and Russian president Dmitry Medvedev grabbed lunch at Ray’s Hell Burger (1713 Wilson Blvd).