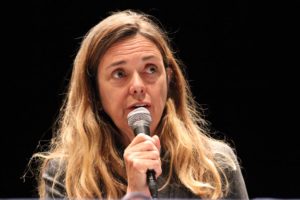 Last week we asked the three candidates for the 48th District Virginia House of Delegates seat to write a sub-750 word essay on why the district’s residents should vote for them on Tuesday, Nov. 8.

Here is the unedited response from Janet Murphy (IG):

I am Janet Murphy, the Independent Green Party Candidate for the Virginia General Assembly House of Delegates. My district, the 48th, includes parts of Mclean out to the Beltway, North Arlington, Crystal City, Rosslyn. So its fun for me to get around most of this district on my bicycle, which I do. Naturally, I applaud and support expanded Arlington Bike Share. It has been an exciting pleasure from the beginning to be involved as a candidate and I recommend it.

The legislative body I aspire to is the oldest in the USA. It was initially the House of Burgesses where George Washington served. During the Revolution it became a bicameral General Assembly. The job pays $17,640.00 per year. The assembly meets starting in January in Richmond for 1-1/2 or two months. One day per year they meet in Williamsburg. The business of the General Assembly is to decide on the commonwealth budget, and pass legislation.

Many of the incumbents run unopposed. There is no limit in Virginia to the amount of money a candidate can accept from a donor. Many companies and public utilities donate money to the candidates. www.vpap.org shows the sources of contributions to candidates. There are only two independent members of the general assembly. I call for more Independent and Green Party candidates to run for all public offices. We need more candidates, less apathy.

We need more trains, less traffic. Cut taxpayer subsidies to auto, oil, asphalt and cement. Shift funds to dedicated passenger track for Virginia Rail Express. Install electronic signs by VRE to show next train. Build a new rail tunnel under the Potomac to cut crowding on the Orange Line. Align with the Sierra Club http://vasierraclub.org/wp-content/uploads/2011/07/NO-Virginia-Transit-Vision.pdf Transit plan for Northern Virginia, which is the product of study.

We need green jobs. 100,000 new solar jobs have been created in the United States in the last two years. We can grow those green jobs and revenue from clean renewable energy in Virginia. Wind energy investment will create jobs as well as green power. Increase the Renewable Portfolio Standards to move to green clean energy. Dominion Power could and should move to over 20% RPS. We need to invest in geothermal heating and cooling systems for state buildings. We need expanded solar systems above parking lots like solar programs announced last week at Dulles Airport, and at James Madison University, and on the Redskins football stadium.

I support strong gun control. I ask for your vote on November 8. Thank you!