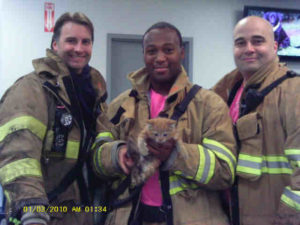 Firefighters were on a call at S. Greenbrier Street and 8th Road S., in the Columbia Heights West neighborhood, when an orange tabby kitten ran under their fire truck and into the truck’s engine compartment. The kitten was covered in grease by the time firefighters were able to free him, according to the Animal Welfare League of Arlington.

The curious kitty, named “Axel” by his rescuers, was brought to the League’s shelter in Shirlington, where he was cleaned up and given a physical exam and vaccinations.

On Monday, vets gave Axel the all-clear to go to a foster home for a couple of weeks until he’s big enough to be put up for adoption, according to the AWLA.