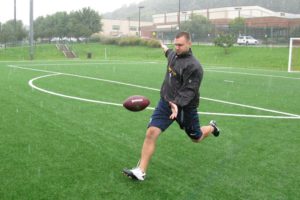 NFL punter and Arlington resident Jeremy Kapinos, who had been jobless since the beginning of the football season, re-signed with the Pittsburgh Steelers last week and played in last night’s game against the Baltimore Ravens.

Kapinos, 27, played for the Steelers last year after starting punter Daniel Sepulveda was injured. He finished the season with a loss in the Super Bowl. Kapinos was released from the team during the preseason to make room for Sepulveda on the roster. But Sepulveda re-injured his right leg during practice last week, and Kapinos was brought back to replace him.

Kapinos punted three times last night for an average of 33.3 yards per kick and a long of 41 yards. Kapinos’ last kick pinned the Ravens back at their own 8 yard line with only 2:34 left in the game. The Ravens, however, were able to drive down the field and score a game-winning touchdown with seconds to go on the clock.

“I’m happy to be back to work and especially with the Steelers,” Kapinos told ARLnow.com this morning, adding that last night “was a tough loss.”