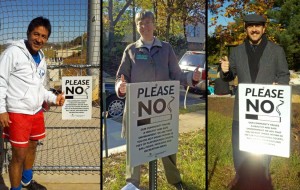 As part of its new “Smoke-Free Parks Initiative,” Arlington County has placed ‘no smoking’ signs in more than a dozen county parks.

But while many government signs convey a law — a ‘no littering’ sign, for instance — the new signs have the word “Please” above “No [Smoking],” since Arlington doesn’t actually have the authority to outlaw smoking in parks. Rather than a ban, Arlington is simply asking smokers to voluntarily refrain from smoking within 50 feet of playgrounds, courts, ball fields, pavilions, recreation areas and other “areas of congregation.”

“To the extent possible, it is important for the County to take action to prevent park patrons’ exposure to this dangerous health hazard,” Arlington County explains on its website. “Children may be especially vulnerable, which is why the Smoke-Free Parks Initiative is specifically targeting areas where children congregate.”

To help spur public awareness of the new initiative, the Arlington parks and recreation department is encouraging Facebook fans to post photos of themselves giving a thumbs up in front of the signs. County Board members Mary Hynes, Walter Tejada and Chris Zimmerman are leading by example by being the first to flash a big thumbs up next to the signs (above).

The parks department will also be holding a “Smoke-Free Parks Kickoff” event at 2:00 p.m. on Thursday, Nov. 17 in Bon Air Park (850 N. Lexington Street). The event is being held in conjunction with the Great American Smokeout.