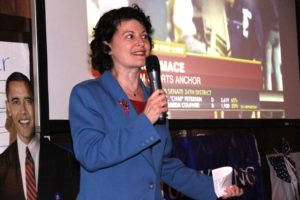 Update at 1:35 p.m. — Peter Owen and Alan Howze both told ARLnow.com this afternoon that they are not planning on running in the County Board special election.

Now that we know Barbara Favola is moving on to the Virginia Senate, the question becomes what happens to her soon-to-be vacated position on the Arlington County Board?

Even though her Senate victory last night is public knowledge, a special election process cannot move forward until Favola formally resigns from the County Board. She can do that any time between now and her January swearing-in. After that, the courts will issue an order for a special election.

But timing really is everything, considering next year’s already bustling election schedule. A special election cannot be held within 55 days of a primary or general election, making it a challenge to fit it in between the presidential primary on March 6 and the U.S. Senate primary on June 12. Arlington County Registrar Linda Lindberg said if Favola resigns immediately, voters would likely head to the polls in early January. If she waits until the end of this year, the special election would be closer to mid-April.

“It looks like it’s going to be a busy election year for us next year,” Lindberg said.

The candidates’ filing deadline is typically 40 to 45 days before the special election. Lindberg said so far only two people have started the ball rolling for a potential 2012 County Board run: Terron Sims and Melissa Bondi. That number is expected to grow now that Favola’s future is known. Potential candidates legally cannot file until a special election is announced. They can, however, still file for campaign accounts for the November 2012 election, and amend the request when a special election is called.

The Sun Gazette also lists , Libby Garvey, Peter Fallon, Stacey Whyte and Kim Klingler as possible Democratic contenders. Klingler, who spent last night getting in a final push for votes for Favola, told us she wanted to wait until after last night’s election to make her final decision.

“I am highly considering running for County Board,” Klingler said. “It’s going to be a very crowded field. I’m highly aware of that.”

She said there are some final logistics to work out and a formal announcement is coming soon.

Green Party County Board candidate Audrey Clement, who lost to Democrats Mary Hynes and Walter Tejada last night, said she’s also considering running. However, Clement said her candidacy hinges on whether she receives the endorsement of her local party. If she doesn’t receive the endorsement, she’ll be reluctant to run.

Republicans may also be interested in nominating a contender. While no Republicans challenged incumbents Mary Hynes and Walter Tejada this year, history suggests that a special election may be the party’s best chance of gaining a toe-hold on the Board. The last Republican to serve as an Arlington County Board member was Mike Lane, who won a special election in 1999 (but then promptly lost in the general election several months later).

Once voters choose the new board member in a special election, things move pretty quickly. The winner has to submit a final financial report, and the election must be certified. Lindberg said that usually happens within 24 to 48 hours.

“We really want to get them sworn in and seated right away,” Lindberg said. “The process is pretty straightforward like every other other election, it’s just more condensed as far as the timing.”