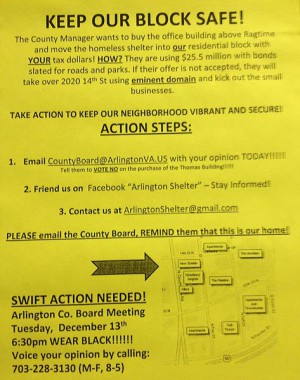 (Updated at 3:35 p.m.) Arlington County’s plan to buy a Courthouse office building and place a year-round homeless shelter on two of the floors is drawing intense opposition from residents of a nearby condominium building.

Residents of the Woodbury Heights building (1301 N. Courthouse Road) have been distributing flyers (pictured), emailing officials and calling media outlets with a litany of concerns over the plan. Chief among them: worries about safety, property values and neighborhood “charm.”

“I work long hours, which often means I am in this area when it is dark,” said one female resident, in a letter to County Board Chairman Chris Zimmerman. “I would feel considerably less safe with the shelter’s entrance so close to what is in essence the front door of my home.”

“The shelter will drive down property values in the area, especially the values of the homes in Woodbury Heights,” the resident continued. “Considering the weak housing market, my home will be even less attractive and competitive to prospective buyers.”

Residents brought their concerns to a Tuesday night meeting with Deputy County Manager Marsha Allgeier and Kathy Sibert of the Arlington Street People’s Assistance Network, which runs the current emergency winter shelter and would run the new shelter.

Sibert said the meeting was “very emotional” for residents but added that she can understand the worries.

“Anytime there’s a change in your neighborhood, you’re very, very concerned, and I understand that,” said Sibert, A-SPAN’s Executive Director. “What I can assure them is that we will have staff there 24/7, and they will have our number, and we will be their neighbor, and we will address any concern they have.”

Sibert pointed out that the office building, at 2020 14th Street N., is directly across the street from the entrance to Arlington County Police headquarters, and only two blocks from the emergency winter shelter. By being open year-round, she continued, the shelter will actually keep homeless individuals off the streets of Courthouse.

“The design… is such that there will be less loitering, less homeless living on the street,” Sibert said. “The police are literally across the street. That can’t get any safer. And we have a really good working relationship with the police.”

Some opponents of the county’s plan say they aren’t opposed to the idea of housing the homeless, they don’t want a shelter located next to theirs and other residential buildings.

“It is my understanding that Arlington has articulated a plan to end homelessness in Arlington through long-term permanent housing,” said the woman who wrote the letter to Zimmerman. “This is a goal I share and support. Respectfully, this proposal seems haphazard and a questionable use of scarce resources since, by definition, this shelter will not be permanent housing. The building is an office building, and an old one at that. I question whether this is actually the best solution for some of Arlington’s most vulnerable citizens.”

“Currently, some of the condo association owners actually volunteer at the emergency winter shelter,” said Sibert. “So they’re not opposed to the creation of a year-round shelter. But it’s always… ‘not in my backyard.'”

Sibert said smaller A-SPAN shelters are located in residential neighborhoods, and have not presented any of the problems that Woodbury Heights residents are worried about.

“It hasn’t impacted the safety of the neighborhood or the property values,” she said.

In addition to the homeless shelter, the 2020 14th Street N. building would also be used to house various Arlington County government offices. Current business tenants in the building have also come out against the proposed purchase, which would eventually force them to move. Those business owners plan to meet with Woodbury Heights residents tonight to discuss a joint response to the county’s plan.