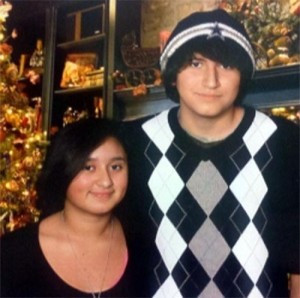 Update at 4:15 p.m. — Police have just announced that the missing couple has been found unharmed in Fairfax County.

Earlier: Arlington County Police are asking for the public’s help in locating a teenage couple that have been missing since yesterday afternoon.

Police say Nathalie Benitah, 14, and Christian Manzano, 15, both left their Arlington homes around 4:00 p.m. yesterday. Christian called his parents around 7:00 last night, but the couple has otherwise not been seen or heard from since.

“Detectives do not believe that their disappearance is suspicious, as Nathalie and Christian left together willingly,” ACPD said in a news release. “Due to the severe cold, police want to locate the couple as soon as possible.”

“Nathalie is a white Hispanic female, 5’1″ and 130 lbs. She was last seen wearing a red jacket, purple shoes and was carrying a purple polka-dotted backpack,” police said. “Christian is a white Hispanic male, 6’1″ and 180 lbs. He was last seen wearing a black jacket, black jeans and a black knit cap with a ‘Dallas Cowboys’ logo on the front. Christian was also carrying two backpacks; one was camouflage print and the other was orange and black.”

Anyone with information about either Nathalie or Christian is asked to call the Arlington County Police Department at 703-558-2222.