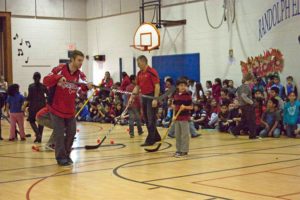 Defensemen Mike Green and Karl Alzner joined assistant coach Jim Johnson and mascot SlapShot at the school for “Capitals Hockey School.” The players answered questions from students in the school’s gymnasium before conducting a floor hockey clinic for 175 third through sixth graders.

“Alzner and Green instructed the students on basic hockey skills such as stick-handling, passing and shooting,” the Capitals noted in a press release. “The students were then called on to try out the skills in front of their peers.” 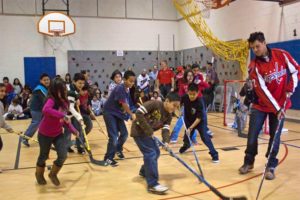 A boys versus girls shootout competition was held, resulting in a 1-0 win for the boys. A subsequent scrimmage resulted in a 0-0 tie between Alzner and the boys and Green and the girls. Three school staff members then scrimmaged against Alzner, Green and Johnson — and won by a score of 2-1.

Following the hour-long event — the eighth Capitals Hockey School in the D.C. area this season — Randolph Elementary was presented with donated street hockey equipment and all participating students were given autographed photos, squishy pucks and Hockey 101 booklets.

Green is expected to undergo surgery this afternoon to repair a sports hernia suffered earlier in the season. Alzner, meanwhile, was involved in his first NHL fight on Friday.