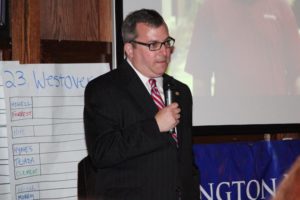 In one of his first acts as a state Senator, Sen. Adam Ebbin (D) has introduced legislation that would require athletic coaches and directors at public and private schools and universities to report incidents of child abuse.

“Senator Ebbin is very concerned about the abuses at Penn State and felt that we needed to ensure that nothing like that ever happened in Virginia,” Ebbin spokesman Donald Moss told ARLnow.com. “The bill will require that reporting of suspected child abuse be mandatory both by those in athletics and anyone employed by an institute of higher learning, which is change to current Virginia code that everyone will agree is all the more necessary in a post Penn State world.”

SB 265 has been referred to the Senate Committee on Rehabilitation and Social Services, which is scheduled to meet on Friday morning.