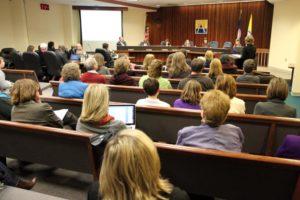 The change, which has been in the works since 2007, would extend core class times — for subjects like English, math, social studies, science and world languages — while reducing the number of classes per day. Longer “block” periods for sixth graders would be 76 minutes, and would increase to 93 minutes for seventh and eighth graders. Electives would remain at the current, shorter length.

An APS staff presentation to the School Board on the block scheduling plan, originally scheduled for March, has now been pushed back to May. Murphy said the delay will “provide additional time to continue to our ongoing dialogue with families.”

At Thursday night’s packed School Board meeting, numerous parents expressed concerns about the proposed schedule changes. Although block scheduling is already in place at Yorktown, Wakefield and Washington-Lee high schools, some parents don’t believe it’s the right answer for middle school students. One concern is the attention span of younger students.

“The class length is not developmentally appropriate for 12 and 13 year olds,” said a concerned father.

APS cites research showing quality of instruction and student achievement as one of the main reasons for desiring the change. Students will spend more time delving deeply into core subjects and less time switching classes, school officials say. Research also referenced classes such as science labs that would benefit from fewer stops and starts due to time constraints.

While officials say block scheduling allows for more elective choices, opponents say it would decrease the amount of time students spend in individual elective classes such as music, physical education and arts.

Many speakers at Thursday’s Board meeting insisted that the block scheduling plan would have a particularly negative impact on music classes. In addition to less class time, some parents said the plan’s reported elimination of cross-grade classes will decrease the quality of music education.

“The proposal as currently presented is deeply flawed,” said Swanson Middle School Band Boosters President Katy Banks. “The new proposal doesn’t allow for cross-grade music programs. It’s a little like if the National Symphony Orchestra were asked to select their musicians based on their age and not their ability.”

With implementation scheduled for September 2013, in time for the 2013-2014 school year, APS has until the middle of next school year to revise its block scheduling concept. The school system, meanwhile, will hold five community forums in February to give parents a chance to learn more about the plan and to provide additional feedback about the proposed changes.

More information about the block scheduling plan and the community forums is available on special ‘Middle School Design Team’ section of the APS website.