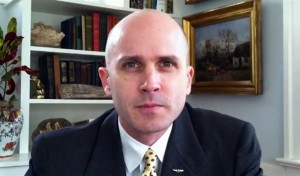 Rep. Jim Moran is facing another challenger in the Democratic primary for Virginia’s Eighth Congressional District.

Bruce Shuttleworth, a resident of Arlington’s Old Glebe neighborhood, announced his candidacy this week and is putting his money where his mouth is: contributing $50,000 of his own money to his campaign. The former U.S. Navy pilot is also coming out in full-attack mode asked why he wants to take on the well-connected, ten-term congressman.

“I’ve been very impressed by our wonderfully honest local leaders, and I’ve been very struck by the disparity in integrity between those local leaders and [Rep. Jim Moran],” Shuttleworth told ARLnow.com, specifically mentioning campaign contributions Moran has received from earmark recipients. “I don’t think he can be trusted to uniformly act in the best interest of the citizenry.”

“I haven’t found more than one or two [residents] who said they think highly of Jim Moran and that they enjoy voting for him,” Shuttleworth added. “I think his likeability factor is very, very low.”

Shuttleworth, 46, was born in New York and spent the latter part of his childhood in Maryland. A United States Naval Academy graduate, Shuttleworth was a naval aviator who served on the carrier USS America during its support of American actions in Bosnia and Somalia. After leaving the military he attended Harvard Business School and went to work for the Boston Consulting Group, before moving to D.C. with his wife about 12 years ago.

Shuttleworth has been an independent consultant since 2008, according to his LinkedIn profile, after working at local companies like MicroStrategy and Blackboard. He and his wife Diane, a lawyer, have two twin 9-year-old boys who attend Arlington Science Focus School.

Eschewing traditional Democratic red meat, Shuttleworth is instead venturing into unfamiliar political territory by focusing on the national debt as a key campaign issue during the primary.

“I think that America is really facing one of the most serious challenges in its history with this out of control debt,” Shuttleworth said. “These aren’t just numbers in a computer. Having more than $250 billion go to interest payments — that’s money that we cannot spend on our [general] welfare. This is a situation that puts us at great risk for hyperinflation.”

“This is an issue that transcends all American interests, and I don’t think it has the proper attention of Jim Moran,” Shuttleworth said, adding that out-of-control debt jeopardizes the country’s social safety net.

If the focus on the national debt makes Shuttleworth sound a bit like a Republican, he’s quick to point out that he’s very much a Democrat on other issues, including the social safety net, women’s health, gay rights and gun control.

Although he has little political experience, Shuttleworth says he has been active in the community. He serves on the Arlington Public Schools Comprehensive School Health Committee, is a Civic Association delegate and coaches basketball and soccer. He says he’s been pleasantly surprised by the pledges of support he has received since announcing his candidacy Wednesday afternoon.

“My iPhone is just beeping out of control,” he said. The congressional primary is scheduled for June 12.