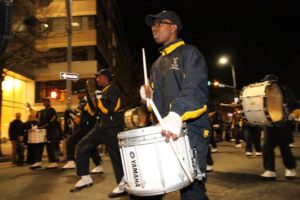 Clarendon’s annual Mardi Gras parade is only two weeks away, and already some 30 groups have signed up to participate.

The parade — featuring homegrown floats, Mardi Gras beads, and people and animals in costume — will take place on Fat Tuesday, Feb. 21, at 8:00 p.m. The parade route will take marchers up Wilson Boulevard from N. Barton Street to N. Irving Street.

Groups expected to participate this year include the Ballou High School Band, the Washington Nationals and the D.C. Rollergirls. The all-women, Afro-Brazilian/samba-reggae percussion band Batala Washington, meanwhile, will serve as the parade’s new drum corps.

Groups can still register to take part in the parade through next Tuesday, Feb. 14.

“Normally we have a lot of participants sign up at the last minute, so we know we’ll have a lot more entries by parade night,” said Matt Hussman, Executive Director of the Clarendon Alliance, which organizes the parade. “We think it is going to be a great parade, and we hope lots and lots of people come out to enjoy the spectacle.”