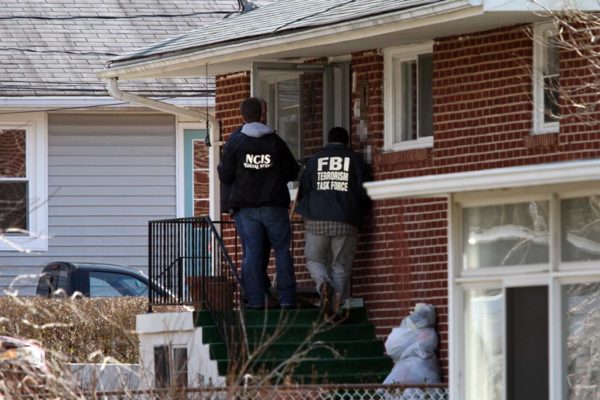 (Updated at 5:30 p.m.) FBI Joint Terrorism Task Force agents are conducting a terrorism investigation at a house in Douglas Park.

The FBI, NCIS and Arlington County Police are on the scene on the 1600 block of S. Randolph Street. Earlier, agents could be seen talking to two men outside the home, where the FBI says it was executing a search warrant.

The FBI now seems to be focusing their search on a shed behind the house. Agents wearing latex gloves and face masks have removed dozens of shoe boxes from the shed and piled them in the backyard. Agents have also put up a blue tarp to help shield their investigation from the dozen or so TV, radio and newspaper reporters camped at the corner of S. Randolph Street and 16th Street.

ACPD spokesman Dustin Sternbeck confirms this is an “offshoot” related to today’s arrest of a Moroccan man by the FBI. The man, identified as 29-year-old Amine El Khalifi, planned on conducting a suicide attack on the U.S. Capitol, according to federal prosecutors. El Khalifi was living in Alexandria but was in the country illegally, prosecutors say.

(See the full U.S. Department of Justice press release, after the jump.)

The home raided by federal agents today has been owned by the same man and woman since 1997, according to Arlington County property records.

A longtime family friend who only identified himself as “Fred” was visiting and said he doesn’t know why the FBI would be interested in the couple. He said they have grown children as well as grandchildren, and live a quiet life at home.

Though it doesn’t specify the address of the house in question, a federal court affidavit mentions a “residence in Arlington, Va.” as a place where El Khalifi allegedly discussed terrorism activity. From the Justice Department press release:

According to the criminal complaint affidavit, in January 2011, a confidential human source reported to the FBI that El Khalifi met with other individuals at a residence in Arlington, Va., on Jan. 11, 2011. During this meeting, one individual produced what appeared to be an AK-47, two revolvers and ammunition. El Khalifi allegedly expressed agreement with a statement by this individual that the “war on terrorism” was a “war on Muslims” and said that the group needed to be ready for war.

Press release from the U.S. Department of Justice:

Explosives Had Been Rendered Inoperable by Authorities and Posed No Threat

WASHINGTON – A 29 year-old man residing in Alexandria, Va., was arrested today for allegedly attempting to detonate a bomb in a suicide attack on the U.S. Capitol Building as part of what he intended to be a terrorist operation.

Amine El Khalifi, an immigrant from Morocco who is illegally present in the United States, was charged today by criminal complaint with attempting to use a weapon of mass destruction against property that is owned and used by the United States. He made his initial appearance today at 4:15 p.m. before Judge T. Rawles Jones Jr. If convicted, El Khalifi faces a maximum penalty of life in prison.

The arrest of El Khalifi was the culmination of an undercover operation during which he was closely monitored by the FBI Washington Field Office’s Joint Terrorism Task Force (JTTF). The explosives and firearm that he allegedly sought and attempted to use had been rendered inoperable by law enforcement and posed no threat to the public.

“The complaint filed today alleges that Amine El Khalifi sought to blow himself up in the U.S. Capitol Building,” said U.S. Attorney MacBride. “El Khalifi allegedly believed he was working with al-Qaeda and devised the plot, the targets and the methods on his own.”

“This individual allegedly followed a twisted, radical ideology that is not representative of the Muslim community in the United States,” said FBI Assistant Director in Charge McJunkin. “He became known to the JTTF because of his stated desire to carry out attacks in the U.S., specifically, the U.S. Capitol building. This arrest is the result of dedicated special agents, task force officers and intelligence analysts from the FBI and our partner law enforcement agencies that make up the JTTF.”

According to the criminal complaint affidavit, in January 2011, a confidential human source reported to the FBI that El Khalifi met with other individuals at a residence in Arlington, Va., on Jan. 11, 2011. During this meeting, one individual produced what appeared to be an AK-47, two revolvers and ammunition. El Khalifi allegedly expressed agreement with a statement by this individual that the “war on terrorism” was a “war on Muslims” and said that the group needed to be ready for war.

The affidavit alleges that El Khalifi sought to be associated with an armed extremist group, and on Dec 1, 2011, he was introduced by a man he knew as “Hussien” to an individual named “Yusuf,” who was, in reality, an undercover law enforcement officer. Throughout December 2011 and January 2012, El Khalifi allegedly proposed to carry out a bombing attack. His proposed targets included a building that contained U.S. military offices, as well as a synagogue, U.S. Army generals and a restaurant frequented by military officials.

During meetings with the undercover officer, El Khalifi allegedly handled an AK-47 and indicated his desire to conduct an operation in which he would use a gun and kill people face-to-face. He also allegedly selected a restaurant in Washington, D.C., for a bombing attack; handled an explosive as an example of what could be used in the attack; conducted surveillance to determine the best place and time for the bombing and purchased materials as part of the planned operation.

On Jan. 7, 2012, “Hussien” informed El Khalifi that he was an al-Qaeda operative. El Khalifi allegedly discussed the possibility that his planned bombing of the restaurant would be followed by a second attack against a military installation to be conducted by others who El Khalifi believed to be associated with al-Qaeda. The affidavit alleges that El Khalifi understood that his attack on the restaurant would be part of an al-Qaeda operation that would include both his restaurant bombing and the attack against a military installation.

The affidavit alleges that on Jan. 15, 2012, El Khalifi stated that he had modified his plans for his attack. Rather than conduct an attack on a restaurant, he wanted to conduct a suicide attack at the U.S. Capitol Building. That same day at a quarry in West Virginia, as a demonstration of the effects of the proposed suicide bomb operation, El Khalifi dialed a cell phone number that he believed would detonate a bomb placed in the quarry. The test bomb detonated, and El Khalifi expressed a desire for a larger explosion in his attack. He also selected Feb. 17, 2012, as the day of the operation, according to the affidavit.

The affidavit alleges that over the next month, El Khalifi traveled to the U.S. Capitol Building on multiple occasions to conduct surveillance, choosing the spot where he would be dropped off to enter the building for the martyrdom operation, the specific time for the attack and the method he would use to avoid attracting the attention of law enforcement. El Khalifi also asked Hussien to remotely detonate the bomb he would be wearing on the day of the attack if El Khalifi encountered problems with security officers, and to provide El Khalifi with a gun that he could use during the attack to shoot any officers who might attempt to stop him.

On February 17, 2012, El Khalifi allegedly traveled to a parking garage near the U.S. Capitol Building. El Khalifi took possession of a MAC-10 automatic weapon and put on a vest containing what he believed to be a functioning bomb. Unbeknownst to El Khalifi, both the weapon and the bomb had been rendered inoperable by law enforcement. El Khalifi walked alone from the vehicle toward the United States Capitol, where he intended to shoot people and detonate the bomb. El Khalifi was arrested and taken into custody before exiting the parking garage.

This investigation is being conducted by the FBI’s Washington Field Office. The prosecution is being handled by Assistant U.S. Attorneys Gordon Kromberg and Michael Ben’Ary of the U.S. Attorney’s Office for the Eastern District of Virginia, as well as Trial Attorneys Joseph Kaster and Courtney Sullivan from the Counterterrorism Section of the Justice Department’s National Security Division.

The charges contained in the criminal complaint are mere allegations. As in any criminal case, the defendant is presumed innocent until proven guilty in a court of law.