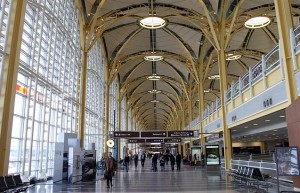 The airport served a record-breaking 18.8 million passengers in 2011, according to the Metropolitan Washington Airports Authority. That’s a nearly 4 percent increase over 2010, which compares favorably to the national passenger growth average of 1.5 percent.

The growth may continue in 2012, thanks to new and expanded service that’s coming to DCA starting on March 25.

US Airways is in the process of adding non-stop service to 11 new cities via Reagan National. And JetBlue is increasing service to its existing destination, while providing new daily service to Tampa.

“Even during these challenging times for the aviation industry, we are very pleased that in 2011 we were able to not only continue to provide excellent air service for the region but also to attract new airlines and service,” MWAA President and CEO Jack Potter said in a statement.