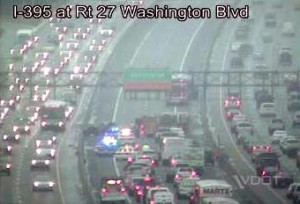 (Updated at 4:42 p.m.) The HOV lanes of I-395 are partially blocked due to an accident involving a bus and an SUV.

Police, fire firefighters and paramedics are on the scene, just south of Washington Boulevard. Paramedics are said to be evaluating several injuries, but so far no serious injuries have been reported.

Southbound traffic on both the mainline and HOV lanes of I-395 is very heavy approaching the accident. One lane of HOV traffic is now slowly squeezing by the scene.