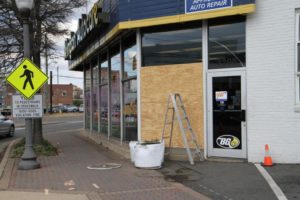 (Updated at 4:25 p.m.) A multi-vehicle accident has closed a stretch of Wilson Boulevard near Clarendon.

One of the vehicles involved  — witnesses say it was a D.C. taxi cab — lost control while driving toward Clarendon on Wilson Boulevard. The vehicle slammed into a car just outside Arlington Autocare, causing one of the store’s windows to break. It continued through the intersection, took out a traffic light control box, smashed several cars in an auto dealership lot, and slammed into the side of the Doctor’s Building before coming to rest.

At least one person was transported to a local hospital. Initial reports suggest the accident may have happened when the cab driver suffered some sort of medical emergency.

A man who was boarding up one of the windows at Arlington Autocare said there were customers inside the store at the time of the accident. According to the man’s account, the cab hit a car in front of the store which was then pushed into the store’s window, breaking it. Had that second car not been there, the man said, the cab may have plowed right into the store, injuring those inside.