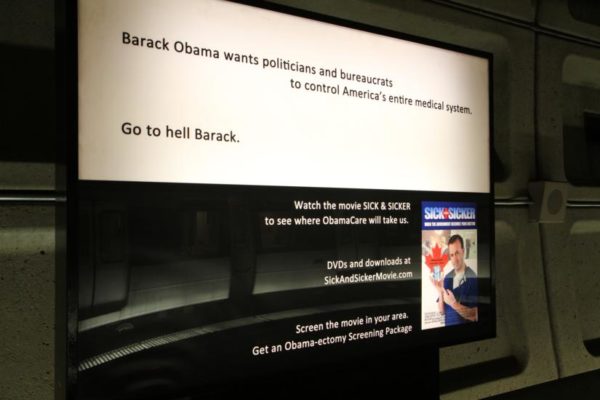 A Democratic lawmaker is speaking out against an inflammatory ad in the Clarendon Metro station that tells President Obama to “go to hell.”

The lighted ad, located near the end of one of platforms, promotes a DVD documentary called “Sick and Sicker: When the Government Becomes Your Doctor,” which sharply criticizes President Obama’s health care reform law and compares it to publicly-funded health care in Canada.

The Democratic blog Blue Virginia first reported the ad this morning. It’s been in place at the Clarendon Metro station since at least last week, based on a search of Twitter posts.

Now, local Virginia congressman Jim Moran (D) is calling for the “offensive advertisement” to be taken down.

“This advertisement is inappropriate, disrespectful of the President, and should be removed immediately,” Moran said in a letter to the Washington Metropolitan Area Transit Authority. “The families with children and thousands of tourists who take Metro everyday should not be subjected to such garbage. I understand WMATA vets these advertisements before allowing them to go up, but it seems someone wasn’t doing their job when this ad was approved.”

Though barely visible, at least one Metro rider tried to respond to the ad by writing on it in pen. “That’s President Obama to you!!” the anonymous scribbler wrote.

It’s unclear if the ad has been placed in any other Metro stations.

WMATA advertising has been ruled by the courts as a public forum protected by the First Amendment of the Constitution, and we may not decline ads based on their political content.  WMATA does not endorse the advertising on our system, and ads do not reflect the position of the Authority.

Update at 5:15 p.m. — Rep. Moran has issued a statement in response to Metro’s statement.

I am disappointed by WMATA’s defense of this inappropriate advertisement. If their current advertising guidelines do not prohibit profane advertisements on taxpayer-funded property, then WMATA should take the initiative and update them. Profanity has no place in the public forum.

The specific language in the WMATA-approved ad that should be removed is not political, it’s profane. It defames the President of the United States in a way that coarsens the public discourse. All Americans have the right to make their voice heard under the First Amendment. But when we are talking about an advertisement on tax-payer funded facilities, as is the case with Metro, it should meet the minimum standards of propriety. I repeat my call on WMATA to exercise appropriate judgment and remove this offensive ad. 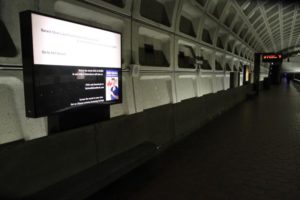 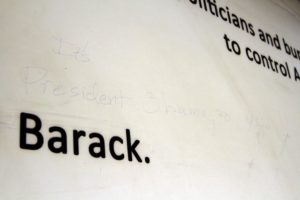