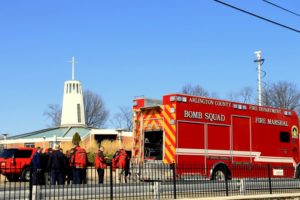 (Updated at 12:00 p.m.) The Arlington County bomb squad was called to a polling place this morning after a suspicious package was reported.

Shortly before 9:00 a.m. a suspicious envelope was found at St. Agnes Catholic Church in Cherrydale, which is a polling place for today’s presidential primary election. Police and fire units were on the scene, in addition to the bomb squad. The scene was cleared around 10:30 a.m.

Contrary to our earlier reporting, the polling place was not closed during the brief investigation, according to Arlington County Registrar Linda Lindberg.

While the bomb squad was on the scene of the suspicious envelope investigation, a second suspicious package incident was reported near Washington Blvd and S. 2nd St. At that scene, VDOT workers came across a pipe wrapped in some sort of packaging, lying in the bushes. All eastbound (southbound) lanes of Washington Boulevard were closed at Second Street as a result of the investigation. See our subsequent article for updated information.