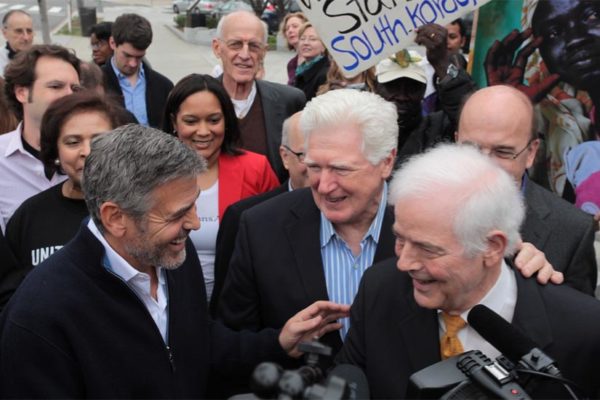 Rep. Jim Moran (D-Va.) has been arrested at a protest outside the Sudanese embassy in Northwest D.C., along with actor George Clooney and several other activists.

Moran’s office confirmed the arrest, which can be seen in this video from NBC Washington.

In a press release yesterday afternoon, Moran’s office explained the impetus for the protest: “President al-Bashir has blocked food and humanitarian aid from entering Sudan’s Nuba Mountains and Blue Nile regions since June 2011, threatening starvation for half a million Sudanese.”

Moran and Clooney were joined at the protest by Rep. Jim McGovern (D-Mass.), Rep. John Olver (D-Mass.), Martin Luther King III, NAACP President Ben Jealous, and journalist Nick Clooney, the actor’s father, among other activists and religious leaders. See a press release from Moran’s office, about the protest and the arrests, after the jump.

“There is a moral imperative for those of us who, but for the luck of birth, benefit every day from peace and prosperity to speak out for those who face the atrocities of starvation and oppression,” said Moran at the protest. “Today, we walk up to the doorway of Omar al-Bashir’s Embassy, and say loud and clear: Enough.”

Since June 2011, Sudan President Omar al-Bashir has blocked humanitarian and food aid to the South Kordofan, Blue Nile, and Abyei regions along the border of South Sudan. Today’s protest drew attention to the aerial attacks by Sudanese forces against civilians displaced by the conflict, as well as the continued refusal of the Bashir government to allow humanitarian access to aid groups. Military action in the region has prevented the Sudanese people from growing and planting food, threatening starvation.

Rep. Moran is a cosponsor of the “Sudan Peace, Security, and Accountability Act of 2012,” H.R. 4169, which would create a comprehensive strategy for ending serious human rights violations, promoting democratic reform, and establishing lasting peace in Sudan.

Moran is a longtime advocate for peace and stability in Sudan. In 2006, Moran was arrested at the Sudan Embassy during a protest against the genocide in Darfur.

To read more on the “Sudan Peace, Security, and Accountability Act of 2012,” please visit: http://mcgovern.house.gov/index.cfm?sectionid=15&sectiontree=168,15&itemid=621

Read more →
More Stories
Bluemercury Store Set to Open in ClarendonYour Beermonger: Live For The Funk, Die For The Funk