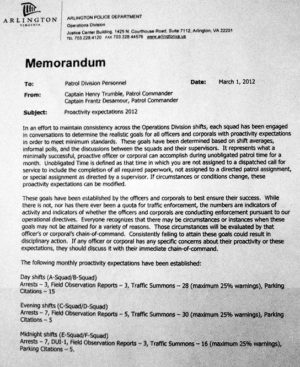 A memo sent to Arlington County police officers earlier this month appears to outline a quota system for traffic tickets, arrests and parking citations, according to a report from television station WUSA 9.

Though the memo says “there is not, nor has there ever been a quota for traffic enforcement,” it goes on to list “monthly proactivity expectations,” complete with a set number of traffic summons and a maximum percentage of warnings.

ARLnow.com obtained a copy of the memo from a police officer who expressed surprise that the department would issue such an obviously controversial directive. The memo itself was authored by two patrol commanders, both captains.

In a statement issued to WUSA, Arlington County Police spokesman Dustin Sternbeck said the memo “serves as a guideline for Operations Division personnel and will not be considered a quota for enforcement.”