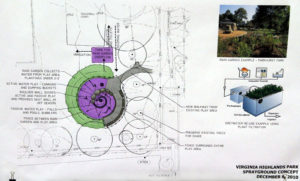 The proposed sprayground at Virginia Highlands Park is behind schedule and likely will not open until next year.

County officials say the project schedule has been extended while they take “some additional measures to ensure cleaner water enters the storm sewer from the sprayground.” That may be a disappointment to residents who were hoping to have a new place for their kids to cool off this summer.